A popular treat around the world, beef jerky (or just jerky) is a meaty dried snack that many people often rave on about. Being a vegan, you’re probably aware that meaty snacks are off limits. Or are they?

Traditionally, meat products are not allowed in vegan diets due to the harm they inflict on helpless animals. However, with recent advances in technology is now possible to grow meat without ever hurting an animal at all.

For a vegan, this might sound strange. Having been told meat is entirely off limits, suddenly you’re able to eat it? What the?

Now we’re not saying that you can eat all types of meat as most of them do come from real animals who have given their lives. However, in some cases, some “look-alike meats” can come straight out of a test tube with no harm inflicted on animals. How so? By using the power of science of course!

How Vegan Jerky Is Made

Traditionally, meat has come from animals and it involves cutting up their carcass and eating it (eww gross!). But with advancements in technology, it’s now possible to grow look alike meats that have the same texture and flavour as regular meat. Vegan meats might sound like a new thing, but they’ve actually been around for several decades now.

A popular cruelty-free meat brand is Quorn and is found all over the UK and US. Founded in 1985, the main ingredient of Quorn is a single cell protein called mycoprotein. Derived from a fungus and grown by fermentation, the fungus is mixed with egg albumen for their vegetarian products and potato protein for their vegan products.

It’s this process that allows Quorn to sell products that have the exact same texture and taste of real meat, without any of the negatives. No slaughter or cruelty, but the same taste and flavour. This is just one example of a cruelty-free meat manufacturer that has taken advantage of this new technology to allow vegans to experience the taste of meat.

To help you expand your diet options and increase the flavors you experience, we’ve hand-picked our favorite vegan jerky. All of these are entirely meat-free and contain no animal by-products at all. The next time you want a snack at work or while you’re out and about, try snacking on these vegan jerkies, you won’t be able to tell the difference from the real thing! If you’ve never tried vegan jerky before and want a tasty introduction to the growing trend, then this jerky by Noble Jerky is a great starting point. Marinated and seasoned to perfection, your taste buds will thank you after giving this mouth-watering vegan jerky a taste.

Made from the highest quality all natural and vegan-based ingredients, you can tell there’s been a lot of time put into making this meatless masterpiece. With zero artificial flavors, trans fats, nitrates or preservatives, Noble Jerky is certainly a brand you can trust when it comes to authenticity. All ingredients are also non-GMO and are sourced locally to support local farmers and producers. 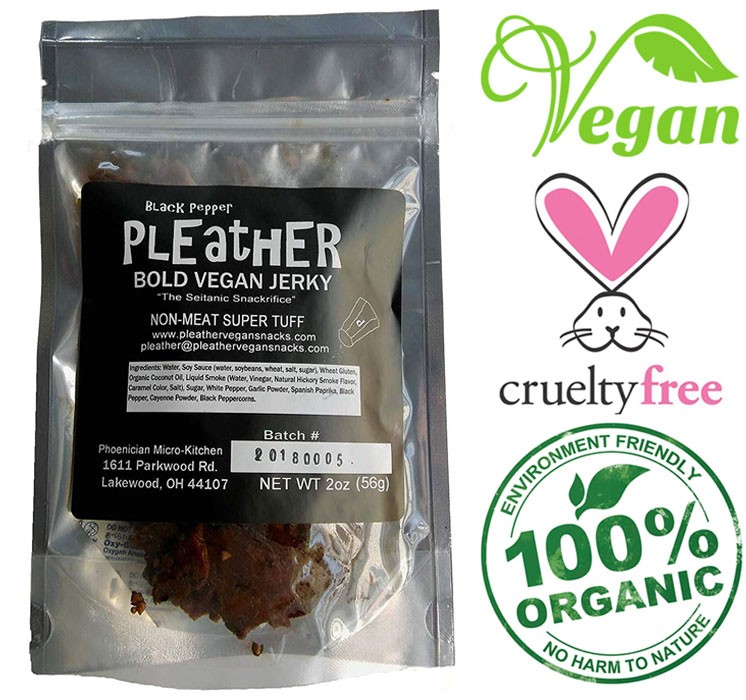 One of the most important things when selecting a jerky is the texture and toughness. Too soft and it’s just like eating chicken, too tough and it’s like eating a brick. Luckily, the guys over at Pleather vegan snacks have managed to make a delicious vegan jerky that is both tough and chewy. The texture is so perfect that even regular meat eaters wouldn’t notice the difference. Many customers have praised its tough and chewy texture as well as its peppery and spicy kick.

As expected, the jerky only contains natural vegan ingredients and there is no meat or animal by-products anywhere. Combine this with a low price and great flavor, it’s clear to see why Pleather’s jerky has rave reviews.

Available in a delicious black pepper flavor, this handmade jerky will leave you wanting more and more! 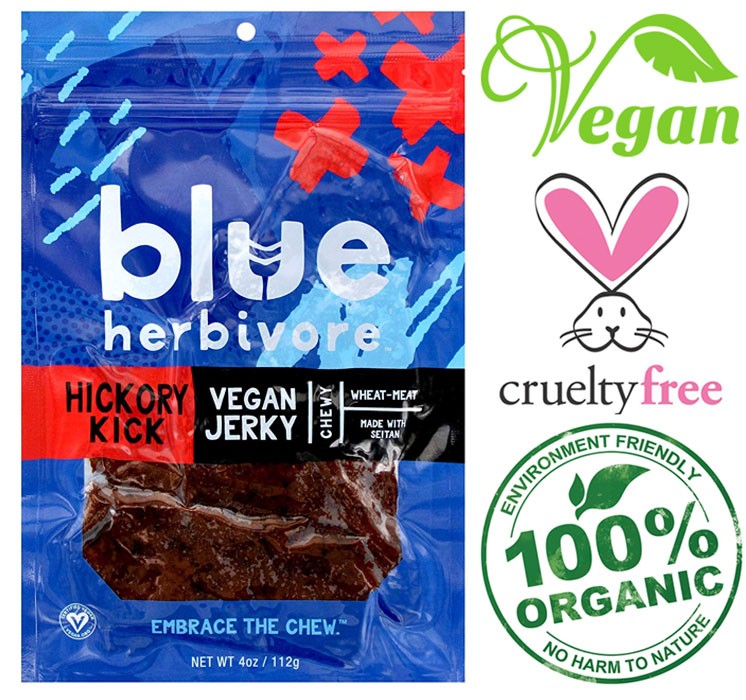 Blue Herbivore is a fantastic family run business with a lovely story behind how it was founded. To cut the story short, when Sean and Nikole’s daughters decided to switch to a vegan diet at college, their father Sean made a unique vegan jerky snack that didn’t contain any soy. Instead, the main ingredient in Blue Herbivore’s vegan snacks is seitan, making it the perfect wheat-meat for everyone to enjoy.

Low in fat and cholesterol but high in protein, this tasty vegan snack will satisfy all your cravings without relying on animal products. Just as chewy as regular jerky, each bag is entirely handmade and comes with a resealable bag.

Available in a range of tasty flavors including Hickory Kick, Teriyaki Zing and Applewood Citrus Sizzle, there are plenty of different flavors to get your taste buds excited! 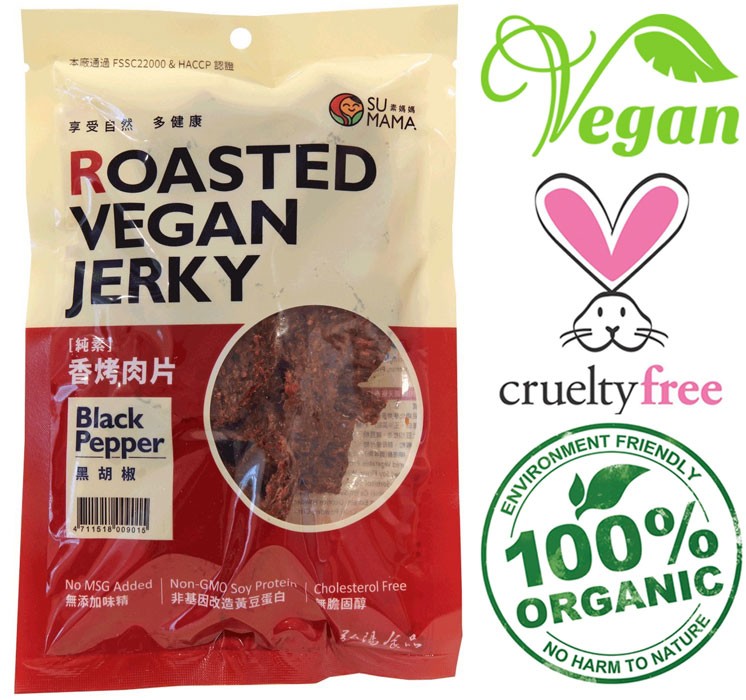 Straight from Taiwan, you can now experience some of the best vegan jerky in the east thanks to Su Mama and their excellent cruelty-free jerky range. Made with the tough meaty texture in mind, this jerky will please even the most diehard meat fans. Take a bite and you won’t believe how realistic it tastes! The texture and flavors work together to produce the ultimate meat-free snack.

As you would expect, the jerky is made from non-GMO vegetable protein and plenty of different spices to create a tasty treat that will leave you wanting more.

This vegan jerky is available in a range of different flavors including Hot & Spicy, BBQ and Black Pepper. 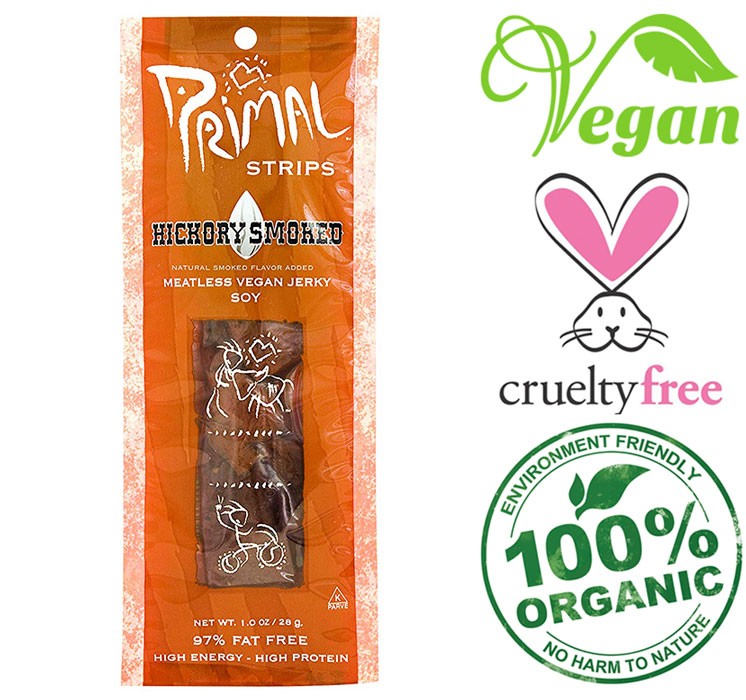 Give yourself an energy boost with these incredible cruelty-free jerkies. Made by the guys over at Primal Spirits, these Primal Strips, contain everything you need to see you through the day.

Containing only natural ingredients and a mix of soy, seitan and shiitake mushrooms, these bites will give you the energy of real meat without the cruelty.

Primal Strips also offer one of the largest range of flavors on this list with 6 unique tastes to satisfy even the fussiest eaters. These flavors include Thai Peanut, Mesquite Lime, Teriyaki, Hot & Spicy, Texas BBQ, and last but not least, Hickory Smoked. As expected, each flavor is free from any animal products and are made from entirely plant-based ingredients. 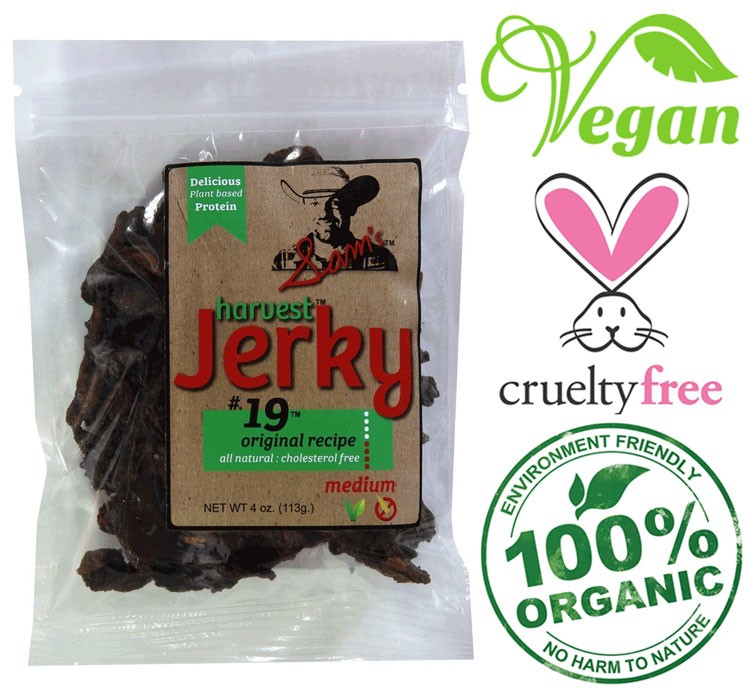 Sam’s Harvest jerky is a delicious blend of healthy plant-based ingredients that make a fantastic cruelty free jerky, which you can snack on anywhere. Perfect for mountain climbers, hillwalkers, cyclists or just the health conscious individual, these vegan snacks truly are amazing.

Not only is the jerky vegan and gluten-free, but it’s also Kosher certified. Whoever said jerky had to contain meat to taste good?

All of Sam’s harvest jerkies are made in the USA (Oregon to be precise) and include locally sourced ingredients. Together, they make one of the finest vegan jerkies you can buy that doesn’t contain any animal products or nasty chemicals. 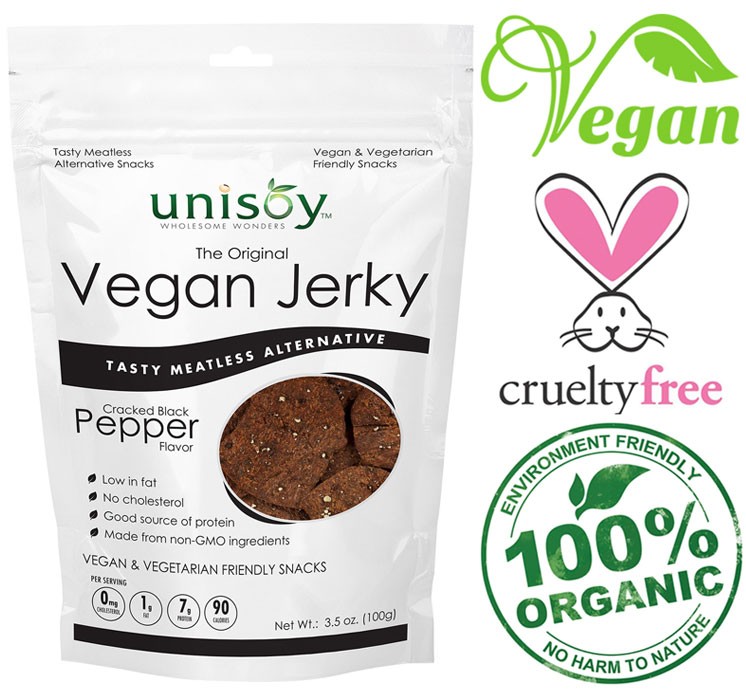 If you want to try jerky for the first time, then there’s no better starter pack than these meaty snacks from Unisoy. Completely cruelty-free and made entirely from non-GMO ingredients, they also contain no cholesterol, low carbs, and no trans fats. Not only does this make the perfect guilt-free snack, but it also makes a healthy meat alternative.

With plenty of rave reviews about the product, many people especially praise its excellent texture, and wide range of different flavors. With so many people raving on about it, it’s definitely worth a try.

Unisoy currently produces a range of vegan jerky flavors including Black Pepper, Mild Spicy, and Teriyaki. Each has its own unique taste that will leave you wanting to try out the others! 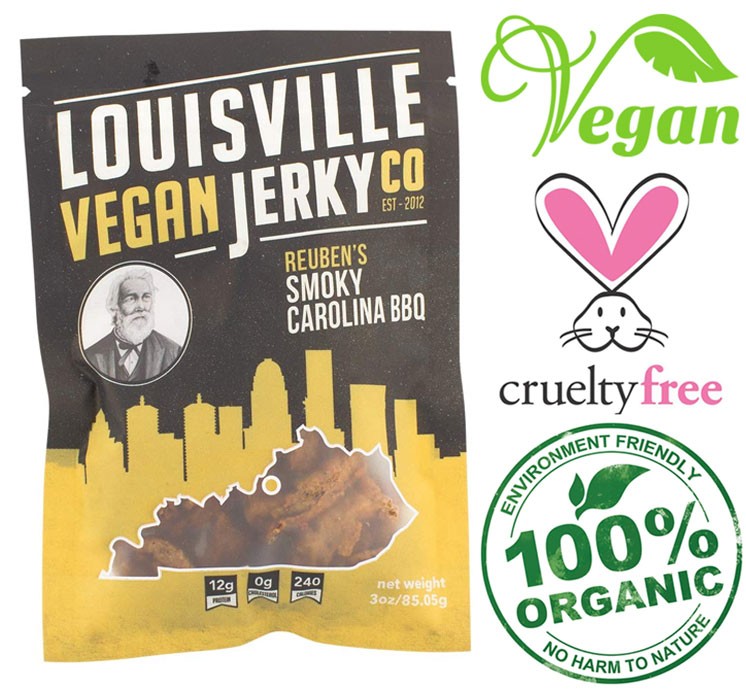 Consistently rated the best vegan jerky out there, the fantastic Louisville vegan jerky claims the number 1 spot on our list with its impressive texture and flavors. Hand made in America using the country’s finest local suppliers, this jerky was also rated Women’s Health best vegan jerky snack. Commenting on the snack, Women’s Health said: “The smoky, tangy taste of this soy-based snack pleases the palate.” Take from that what you want, but to us it says… buy this delicious snack!

As you guessed, every packet of Louisville jerky is free from all the nasty things you’d find in normal jerky such as any meat, gluten, cholesterol or GMO ingredients.